Helping You Create Your Best At Home, At Work, and in Life

Harness the Creative Power of Belief 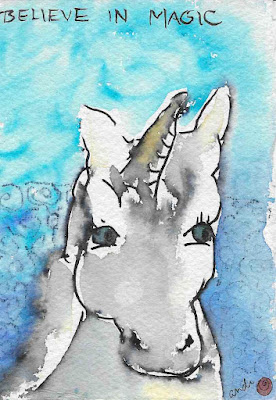 Ok, so unicorns aren't real. (Yet? Hmmm...)
Not too long ago, neither were cellphones, computers, airplanes, or any of the modern and technological conveniences we take for granted.
Creativity usually starts with a question, 'What if...."
A good dose of belief helps propel and fuel the process.
If you set off with curiosity and belief in yourself, then the blank page begins and becomes. And, the opposite is also true, if you believe you will ruin the blank page, you probably will.
The same holds with any creative process. Once the idea and intention is set, it's belief that drives gathering the right team and resources to test, develop, and eventually create your product, whatever it is. Once the belief turns to "it can't be done," then it won't be, because all effort will stop.
When you believe with your whole being, you harness the creative power of belief. Do you want to create health? It's most important to believe you will be well. The placebo effect has been well proven, as has the power of belief in healing. Yes, you might need medical help or therapy, but with belief and time, you can choose positive thought patterns and habits to contribute to creating your healthiest self.
What do you believe is worth creating in your life?
Posted by Andree Santini at 6:00 AM

INSPIRATION is drawing air into the lungs, or inhaling, the most fundamental process for life. It's also the act of feeling inspired or moving others to feel inspired. The word comes from the Latin in spiritus, meaning to bring in spirit, and is often attributed to divine influence. Moving from a state of inner flow with focus on the breath, such as occurs in meditation, yoga, music, and art can lead to elevated feelings of well-being and inspiration.

The beautiful island of Lesvos has thousands of families seeking asylum from their war torn countries. Many of these people are living in overcrowded, flooding camps with poor sanitation and little food. Some of the more vulnerable people have been moved to tiny apartments. 100% of your donations will be given to help feed and support a struggling family in need. Thank you.

I'm an artful mindfulness and yoga teacher, inspiring positive imagination and balanced movement towards creative, joyful well-being. I'm intimate with the creative process, and intrigued by neuroplasticity, the ability of our brains to overcome trauma, to learn, and to change our minds by constantly creating new neural connections. In addition to teaching, illustrating, writing, and making art and music, I'm a chemist with over 25 years experience inventing art products for children, and hold 7 US patents with additional patents pending.

This site uses cookies from Google to deliver its services and analyze traffic. Your IP address and user-agent are shared with Google along with performance and security metrics to ensure quality of service, generate usage statistics, and to detect and address abuse.